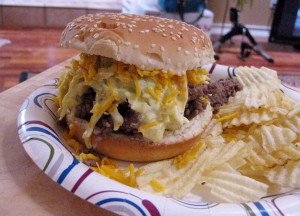 Heat oven for lightly toasting the hamburger buns. Brown loose meat and season with salt and pepper, garlic and onion powder to taste. Drain off nearly all fat. Add a small amount of water to keep the meat “juicy.” Mix all sauce ingredients in a bowl. The amount of mustard and/or mayo in the sauce is a matter of preference.

Comment:  This is the original MAID-RITE recipe according to my mom. She has been making these hamburgers since 1939 and also had the honor of eating her first ones in Muscatine, Iowa *home of the MAID-RITE sandwiches*. CLICK here to read more about Mom’s 1939 experience…

Because I believe FUNNY is better than sackcloth and ashes . . .

Kat’s almost-full-time job has become dodging the embarrassing tsunami of male attention aimed at her mother Ellie, a social butterfly who bears an uncanny resemblance to film star Marilyn Monroe. To add to Kat’s woes, her stepfather, Roy, has lately grown irrationally jealous of his beautiful wife. Kat buries her worries in movies and classical novels, but when Roy’s rants turn violent, she and Ellie plan an escape via Route 66 to the freedom of a new life in Las Vegas. Instead, they wind up in a small Arizona town crawling with the mafia. Trouble escalates when Ellie attracts the eye of a mafia Caporegime who, along with Roy, is determined to have her at any cost.

Another epic historical fiction novel catapulting the reader from Texas into Mexico, Argentina, China, British Hong Kong, Italy, and into the epicenter of another action-filled human drama. Yes… there is an elephant in it, lol! Watch for it in early 2023!

Author Note to YOU: Many folks, including some librarians, think this series is for kids only. Don’t believe it! Our feedback has proven over and over that most of the “Silki fans” are full-fledged adults . . . like you! There is an earlier version of these novels that leans a bit more toward younger audiences, but they, also, were not merely kid lit. The new enriched series is for every age on the planet. Test me! ~ Jodi