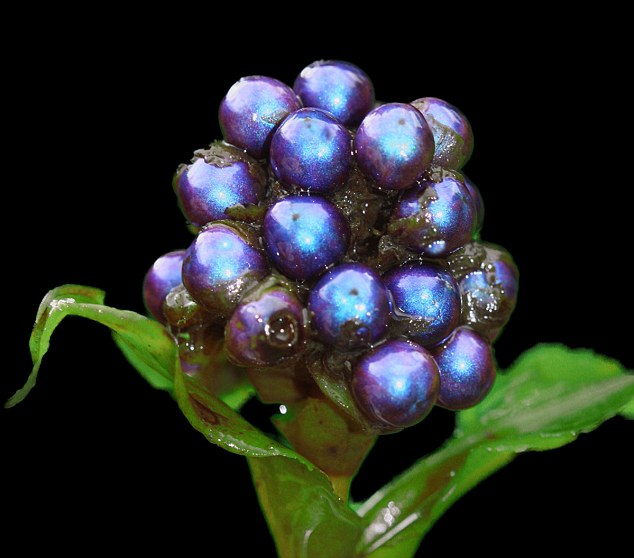 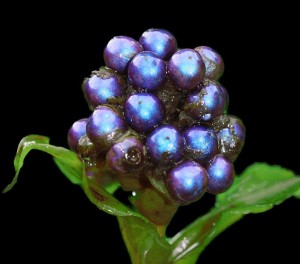 A DAZZLING African rainforest fruit has been hailed as the most colourful biological species known to science.

The small, spherical, metallic blue ‘beads’ grow at the head of the 1ft 6in high Pollia condensata plant that ranges from Ethiopia to Angola and Mozambique where they are used as decoration.

Its cells all reflect different colours giving it a ‘pointillist appearance’ – the technique used by impressionist painters to use a series of dots to represent a solid whole.

State-of-the-art microscopes showed its iridescent skin – meaning it changes colour according the angle at which it is observed – has no blue pigment.

Its intense colour comes from the interaction of light with tiny fibres of cellulose strands stacked as layers of helixes within the cellular walls of the fruit’s skin.

The distance between these layers slightly varies from cell to cell – altering the reflected colour from each point and giving a stunning pixelated appearance as well as a luminous quality.

Physicist Dr Silvia Vignolini and colleagues said light reflects either in a left or right direction from every cell of the fruit – a highly unusual feature for a single tissue.

The researchers whose findings are published in Proceedings of the National Academy of Sciences suggest the fruit’s colour functions to mislead seed dispersers – attracting them without offering any nutritious reward.

Alternatively it could attract birds or animals that decorate their nests or arenas to entice mates.