Dressing, aka Stuffing, aka Filling is Both Personal and Emotional 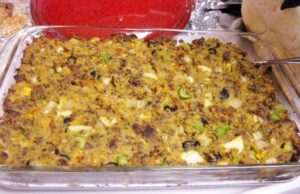 It seems the term stuffing didn’t fit the decorum of the Victorian upper class, so they renamed it dressing. Today, it depends on where you live or from where you originally hailed whether you call it dressing, stuffing, or filling. It will always be dressing to Southern-girl me.

It’s personal because it includes regional tastes and family traditions.

If you are from the eastern/northern/southern coast regions of the United States, you most likely want oysters or other seafood tidbits in your dressing.

From the South/Midwest, you usually use cornbread or a mixture of stale bread – even leftover biscuits – PLUS cornbread as your main ingredient.

Italians bring their love of sausage to the “dressing table.” Check it out here.

Germans stuff potatoes in just about everything, and that includes their holiday stuffing. Check it out here.

Norwegians sometimes use rye bread, pork, and dill. Check it out here.

How about a Mexican version using chorizo, jalapenos, and cilantro? Check it out here.

Every culture that ever came to the United States has a different version of dressing. Combinations are endless. One might say the side dish we all think about at holiday times and special occasions includes recipes that literally circle the globe. 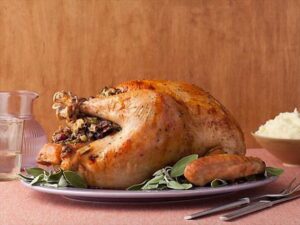 Most people make dressing just like dear ‘ol mom or grandmother or Aunt So and So. No two people seem to agree on what makes the perfect dressing. Many interesting family feuds have started over these differences-of-stuffing opinions at holiday time.

I remember preparing a Thanksgiving meal one year with my sister-in-law. Now, we were in our early twenties and usually got along great. However, we had a bit of a stare-off when it came to making the dressing early that morning. She was from New Orleans, and no way, naw suh, was she going to have dressing without oysters. And as sure as I was standing there clinging to my stubborn Southern roots, I was not making dressing without cornbread and sage!

Silly us. We compromised by using everything we both felt we had to have, and, unbelievably, it turned out quite delicious! Different… but tasty! Later, we sipped lime Kool-Aid laced with a touch of vodka and complimented ourselves. After all, we did all the work and had to clean up all the mess, too. So… the touch of vodka was kind of necessary, lol.

Lime Kool-Aid. Yeah. Boy, were we ever young!

One thing most of us can agree on is that we love our dressing sitting proud beside *or inside* the turkey, chicken or Cornish hens at Thanksgiving or Christmas. It’s comforting. It’s delicious. It’s traditional.

My personal recipe for dressing is in the Recipes section of my blog. It has cornbread, sage sausage, black olives, celery… well, go see for yourself right here. 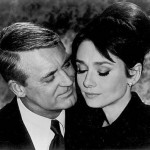 No, I’m not that kind of girl, Cary. I can’t call it ‘dressing’ if we’re in Boston. They call it ‘stuffing.’ Don’t embarrass me.

What does (dressing, stuffing, filling) mean in your neck of the woods?