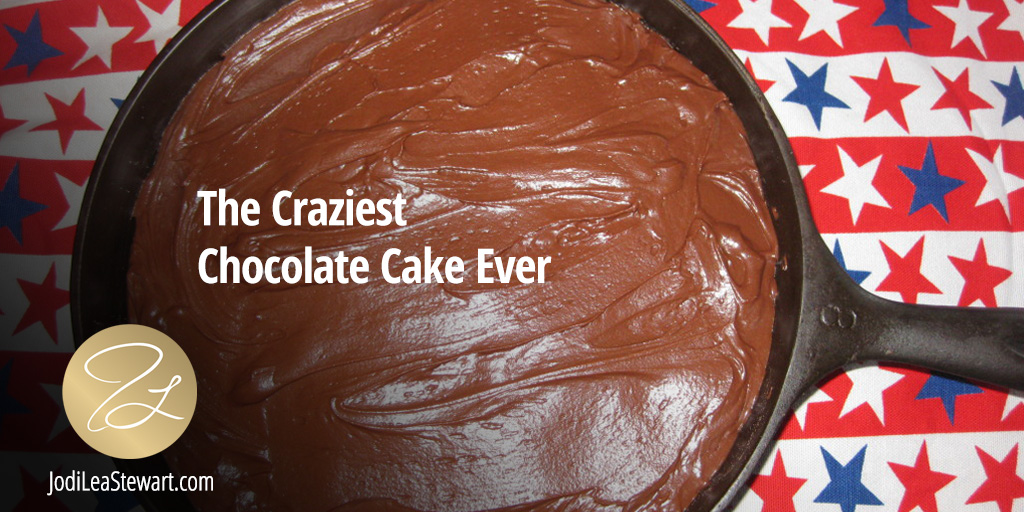 Crazy Chocolate Cake! No eggs, no milk, and a bit of vinegar. Hand mix. You won’t believe the texture.

If you follow the instructions and don’t let this cake overbake*, you’re going to throw away all your 15-Steps to the Perfect Chocolate Cake recipes. This one will beat them all out, and that’s a promise.

*overbaking, even a little, dries it out significantly*

This family recipe is so old, it almost doesn’t exist! 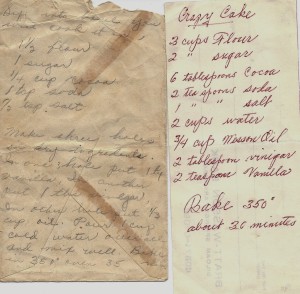 Add dry ingredients to a #8 iron skillet and mix well. Add oil, vinegar, vanilla, and water. Stir well. Bake 20-25 minutes at 350-degrees. Cooks fast. Check often. I use the toothpick inserted in the center method. It has no eggs, so it dries out if you overbake it. Watch carefully. Cool on a rack or on wadded-up pieces of foil if you’re camping and don’t have a rack. I oftentimes use ½ cup water with ½ cup coffee instead of the 1 cup water. Yum!

Frost with your favorite chocolate icing. I love to use the Hershey’s Cocoa recipe, which I follow exactly, except I use a pinch of salt.  I use a lot of icing on Crazy Cake.

Comment:  Crazy Cake is perfect for motorhome/trailer/outdoor campouts. If you have any leftover (rare), leave it in the skillet and cover it tightly with both plastic wrap and foil. 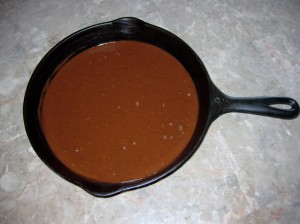 Raw in the skillet. I’m not a chemist, but I think the bubbles are the vinegar and baking soda interacting. 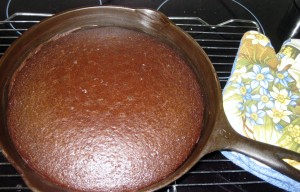 Look at that shine, and it tastes as good as it looks. Frost and enjoy!

I’m proud to share this and many other family recipes with you in the recipe section of my blog. Want lots of old-timey Southern recipes known as Survival Foods for folks in the depression era and after? Check out the recipes at the back of my historical murder mystery, Blackberry Road.