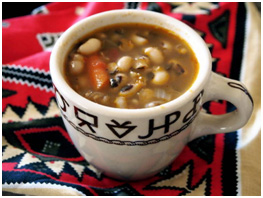 Prepare black-eyed peas by picking out any rocks or discolored peas. My method: Pour dried peas onto a flat surface. I use the kitchen table, using my hand to scrape the cleaned peas into a colander in my lap. Rinse under running water. Put into a heavy 6 qt. pot.

inches of liquid above the peas, depending on how “soupy” you want it to be. They will swell somewhat as they cook, but not as much as pinto beans. Stir. Add chili powder, lots of black pepper, and start with 2 or 3 tsp. of salt. As the peas soften, taste and add salt as needed. Use less salt if using a salted chicken-broth base.

Bring to a boil, uncovered. Reduce heat. Cover partially and simmer about 25 to 30 minutes. Stir and check often for desired softness. Don’t overcook. Add ham, heat through, and serve. Delicious with cornbread. 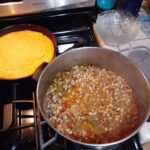 Click: Do you love stories set in Exotic Locations?

Author Note: Many folks, including some librarians, think this series is for kids only. Don’t believe it! Our feedback has proven over and over that most of the “Silki fans” are full-fledged adults . . . like you! There is an earlier version of these novels that leans a bit more toward younger audiences, but they, also, were not merely kid lit. The new, enriched series is for every age on the planet. Test me! ~ Jodi