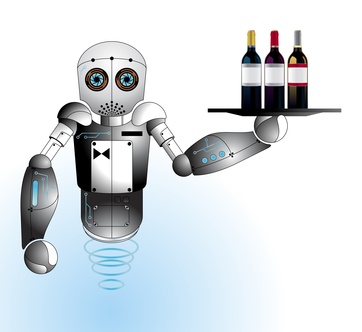 Verella awoke to the sound of her wrist ringing.

Her wrist wasn’t really ringing, but the compact instrument strapped to it demanded her attention in a screechy, nagging tenor.

“Yes?” she whispered groggily, pushing her RESpond button. Her other hand rubbed her temple to quell the throbbing inside her head.

“Verella? Great! I caught you before you left the hotel. Send me another set of those charts we discussed this morning before you fly off to Beijing. What time is your flight anyway?”

While Mr. Hummph, Verella’s boss, blathered from the top side of her wrist bone, Verella struggled to control her rising ire. She tuned him out for a  femtosecond to gather her wits.

What the . . .? My plane leaves in four hours. Thanks to that global conference Mr. Hummph blared at 1 a.m. by setting off those gawdawful emergency X-Bells in our  laptops, I’ve had two hours sleep. I’ve got so much jet lag, I’ll probably run into myself sometime around noon.

“Verella! Did you fall back to sleep?”

“Minutes? Better make that seconds. Time is money, Verella, money. But you know that, you little globe-trekker you.”

This week, Mr. Hummph’s globe-brokers, of which she was a part, but simply tagged as X705 to everyone but Mr. Hummph, were working in Beijing, Brussels, Moscow, Paris, Dubai, Tokyo and Never-Heard-of-It Nevada. Did that annoying man ever get any sleep? Lord knows she never did.

Verella dug her GPFX *GlobalPORTOTrans* from her purse, connected it to the laptop and issued a verbal code-connect-go. She stared at the purple pulses and wondered if Mr. Hummph could possibly be one of the new HU-ROBS already speculated to be infiltrating earth’s population. Of course, HU-ROBs were vehemently denied as myth, but exponential rumors about anything always adds up to something, Verella believed wholeheartedly.

Promising she would check out her suspicions when she returned stateside, Verella clapped her hands. Travel Tesauro, her constant travel assistant, whirred to life—his crimson, green and amber lights twinkling.

After a Command-String, TT – as she affectionately called him – instantly packed Verella’s suitcase, leaving the lid open for her pajamas after her morning toilette. He magnetically started the bathroom shower and waited for her with a warmed towel as she stepped out three minutes later.

While she sat in the hotel chair, TT presented Verella with a frothy latte and a power beet bar. TT’s front quadrant morphed into a giant clock with a second hand ticking away in Verella’s face. She allowed herself a long four minutes to relish her breakfast, thankful her assistant had made the latte lukewarm for fast downing.

A tray loaded with Verella’s makeup flipped out from TT’s left side. The tray exuded soft music 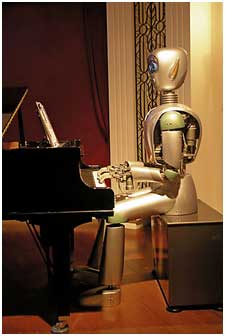 with a rousing under beat – one of the new music strips that soothed and hurried a person at the same time.

A peacock blue *Verella’s favorite color* panel glowed from TT’s other side as he awaited her makeup instructions for the day. “Moisturizer. Foundation. Enough rouge to cover my ghastly pallor. Comb out my eyelash extensions with the burr brush. Teal eyeliner. Relaxed eyebrows. Ratta-2-ee coral lipstick,” Verella commanded in soft tones.

After the last dab of robotically applied lipstick, TT zipped the suitcase closed and waited while Verella wiggled into her travel clothes.

Less than 30 minutes after arising, she emerged breathlessly from the Marriott Village d’Ile-de-France into a waiting cab, her freshly pressed suit crisscrossed with straps holding her TransGlobal-Connecting devices. TT carried her luggage and a medium-hot paper-cup latte for the ride to the airport.

While Verella settled into her plane seat for the flight to Beijing, TT worked at blinding speed to set up her in-flight office so she could begin working before takeoff.

She put her head back and sighed.Watching TT, she calculated she had at least sixty seconds before he completed his tasks – enough time for a few random reflections.

Thank the galaxies I became a biz-globe-broker and not one of those poor, weird women who manage households, she thought with a little shiver of disgust.

Their lives are so demanding.

Of course, this is satire, but do you think our connectivity might reach a point in which we scream, Enough! ?

Do you sometimes feel you are part of a surveillance society? As Orwellian as it sounds, we can now be contacted and/or observed anywhere in the world 24/7. Does that bother you? Personally, it doesn’t worry me that much. At least I can still choose WHEN and WHERE and HOW I want to be connected via computer, smartphone, etc. That gives me a bit of an illusion of retaining control.

Even if genuine seclusion is becoming a thing of the past, I can live happily in a 24/7 Connectivity World as long as I still control the finger that turns on *or off* all those connectivity devices! Make sense?

P.S. I recycled this post from a published article I wrote long ago. Understandably, I’ve had to seriously update the technological elements in the rewrite.