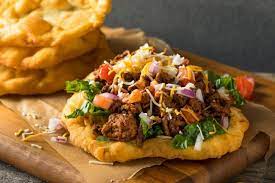 Frybread Recipes are not difficult.

Plain or stacked high, they are delicious!

Why not give it a try?

Note: There are many frybread recipes; this is Lolita Tsosie’s Grandmother’s recipe.

To each cup of Blue Bird flour, add:

Mix flour, baking powder, and salt. Always put a little more baking powder than salt so it can rise better in the hot grease.

Add warm water a little at a time so the dough will come out all nice and round. If you add too much water, it gets sticky. 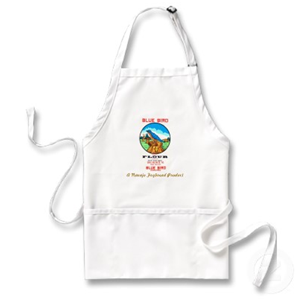 Blue Bird Flour is often the preferred frybread flour for Navajos and other smart folks.

Heat your skillet with lard or shortening. It has to be plenty melted, and fill the skillet halfway.

Make little round balls about the size of a pool (billiards) ball. Flatten out a dough ball to about ¼” – not too thin, or the heated grease will make it too crisp. You’ll know when the grease is hot enough because it properly browns the dough. Turn it and brown the other side.

Repeat until you have made the amount you wanted.

Drain on paper towels or newspaper.