This is the cobbler your family and guests will remember and ask for time and again!

Mix together and let rest while making pie dough.

Mix flour and salt together with a fork. Cut shortening into flour with two knives. Handle lightly and make into pea-sized crumbs. Add water gradually and mix with a fork until dough barely sticks together. Divide the dough into two balls.

Roll out 2/3 of dough on a lightly floured surface. Turn once. Roll thin. Roll onto rolling pin and place it over a 9 x 13-glass pan. Fit the dough into the pan, pressing lightly to fit it into the corners. Be careful not to puncture dough.

Roll out last 1/3 piece of dough and set aside. 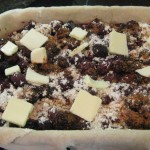 Add blackberry filling to pan. Sprinkle with cinnamon and sugar if desired. Add dollops of butter. Place second piece of rolled-out dough over the berry mixture. Bring sides of bottom crust onto top and cut off excess. Top should be solidly covered with dough. Make slits or designs so cobbler breathes while baking. Sprinkle top with brown or white sugar and cinnamon.

Bake at 425-degrees for 15 minutes. Reduce heat to 350-degrees and bake another 30-40 minutes until crust is golden brown and berries bubble up through slits in the top.

And let me know how it turns out, okay?

Jodi Lea Stewart is a fiction author who believes in and writes about the triumph of the human spirit through overcoming adversity. With an Okie mom and a Texas stepdad, her writing reflects her life beginning in Texas and Oklahoma, later moving as a youngster to an Arizona cattle ranch next door to the Navajo Nation, and, as a young adult, resuming in her native Texas. Growing up, she climbed petroglyph-etched boulders, bounced two feet in the air in the backend of pickups wrestling through washed-out terracotta roads, and rode horseback on the winds of her imagination through the arroyos and mountains of the Arizona high country. Her lifetime friendship with all nationalities, cowpunchers, and the southern gentry allows Jodi to write comfortably about anything in the Southwest and the South and BEYOND.

Kat, a teen, and her mother Take off on Route 66 to escape an abusive home life and stumble into the epicenter of crime peddlers invading Arizona and Nevada in the 1950s. Stranded hundreds of miles from their planned destination of Las Vegas, they land in a dusty Arizona town full of ghosts and tales, treachery and corruption. Avoiding disaster is tricky, especially as it leads Kat into a fevered quest for the simple things of home and a sense of belonging. Danger lurks everywhere, making her wonder if she and her mother really did mess up and take The Accidental Road of life.

It’s so much fun to read Jodi Lea Stewart’s books and to be taken away into the worlds that she creates, mainly because they are not just entertaining, but also teach us a lot about ourselves and life in general. THE ACCIDENTAL ROAD is no different . . . and in true Jodi Lea Stewart fashion there is a solid mixture of fun, adventure and even danger in store for this daughter and her mother . . . which is what makes the book so engaging. This is the kind of book you will want to read slowly so that you can savor the journey. From beginning to end, THE ACCIDENTAL ROAD has all the ingredients of a satisfying read ~ Cyrus Webb, Host of ConversationsLIVE, president of Conversations Radio Network, tv show host, author, and Amazon top reviewer