Picasso Had His Moods, but Red Had His Moves (Revisited)

I made an ironclad discovery while viewing Picasso and the Age of Iron at the Modern Art Museum.

Walking among the wire, bronze, sheet metal and iron exhibits such as Picasso’s Head of a Man and Gonzalez’s Woman with a Mirror, a steely thought gripped me. My gosh, I exclaimed to my most attentive audience—me. I, too, have lived with greatness—rubbed elbows with it—and did I really appreciate it? Did the world? No… a thousand times no!

With the sharp pangs of dread twisting in my chest, I continued my tromp through the abstract jungle celebrating metal and wire and citified artists turned loose with welding tools.

Cupping my hand over my face and leaving only a little slit for viewing with one eye – that’s all I could tolerate at the moment – I absorbed the metal blobbies around me. My one eye, now becoming rather jaundiced and swollen with overwork, took in Alexander Calder’s Yellow Disk with ironic observation. Contemporaries of Calder (1898 – 1976) should have told Calder that his “yellow disk” in the center of his creation was not yellow at all, but a bright tangerine color instead.

My common sense told me that Calder’s associates had to be direct descendants of those dudes from way back who wouldn’t tell the emperor his clothes were constructed of nudity.

On and on I wound throughout the museum’s alcoves taking in everything from Alberto Giacometti’s Walking Man II, to David Smith’s Voltri VII.

Giacometti’s creations caused me to mentally list why I should weigh 100 pounds less than I do, and Smith’s creativity eluded me, even when I swiveled my head around ala The Exorcist.

Through it all, disturbing voices were messing with the “back 40” of my mind…voices that stirred memories of my departed stepfather, Red Myrick, and his own brand of art.

Reaching out a clammy finger to trace the atrociously bubbled seams of a sculpture, I was instantly surrounded by a museum Gestapo troop who chastised me and reminded me to remain a pristine six to twelve inches away from the art, even the sculpture stands.

In fact, one uniformed person glowered at me: Don’t even breathe in the direction of these priceless pieces of art, you peasant!

Of course, to be fair, I must mention that this message came telepathically from him to me as he glared at me and I stared back at the single line of thick black hair traversing his forehead where two eyebrows usually live.

Hmm, I thought to myself. He certainly looks artful.

At this point, I submitted to the waves of nostalgia ebbing and flowing through my mind.

My thoughts turned back to another place and time – to my long-ago gentleman cowboy Pop… Red Myrick.

It’s hard to describe him, really. He could do amazing things. Things like… looking you over carefully, then cutting out a western shirt pattern from newspaper and sewing up a perfectly fitting shirt for you. Some oldies but goodies may remember a shirt label of times past, Red Myrick of Arizona. Before that, he had a saddle shop in Santa Fe, New Mexico (see 4th paragraph of link).

One time, Red ran for senator of New Mexico. Instead of fence-straddling politics, Red campaigned at charity benefits and boys’ ranches like Cal Farley’s Boys’ Ranch, trick roping and riding atop a galloping horse. He didn’t win the election, but he won plenty of hearts.

When Red was a strapping young man, Tom Mix tried to persuade him to go to Hollywood to become a motion-picture cowboy. He checked it out. Too frivolous for him. He wanted to carve out his life from the work of his hands… and his heart. After all, he ran away from home and joined a cattle drive when he was five years old. At the end of the day, his dad showed up and took him home. He never understood why.

Because Red had another little hobby – welding and metalworking.

For fun one time, Red welded (seamlessly, I might add) an Airstream-style trailer he designed that carried hunting dogs and trained mules (Red trained them) and boasted separate sleeping and eating quarters for the hunters. The first one! Now those rigs are commercially manufactured. He gave away more patents than was reasonable, but he did file and hold some of them. Another time, he bought several Army vehicles dubbed “mules” and converted them into hunting/fishing vehicles for his friends.

Humble. Workaholic. Genius. That was Red. If he got bored, he made cabana chairs out of horseshoes. Beautiful work. Perfect metal seams. Or he hand-tooled elegant saddles and travel satchels in elegant rich design. I still have one of those travel satchels. Looks like a fancy, tooled leather duffle with a sturdy bottom and latch. Gorgeous. All part of Red’s repertoire!

There seemed to be no end to his ideas and designs—and no end to his talent to create those designs from a few scratched-out drawings on a piece of paper and by using the tools and/or materials he had on hand.

No one wrote endlessly about Red and his creativity.

No journals, leaflets, or volumes describe his form or elusiveness or how his “interior surfaces justapositionally complimented his exterior planes” *as they have written for the long-ago artists.* I know if he had been with me at the museum that day, his eyes wouldn’t have missed one globby seam or messy assembled image from dissimilar parts. 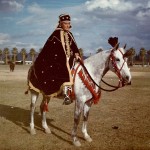 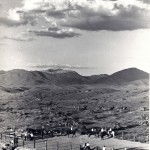 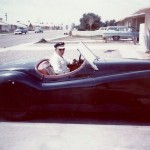 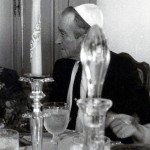 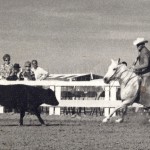 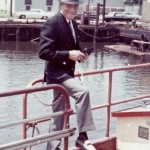 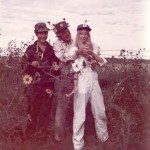 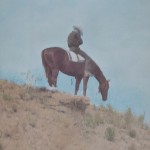 Click: Silki, the Girl of Many Scarves trilogy will satisfy all your exotic-location cravings!

Author Note: Many folks, including some librarians, think this series is written for kids only. Don’t believe it! Our feedback has proven over and over that most of the “Silki fans” are full-fledged adults… like you! There is an earlier version of these novels that leans a bit more toward younger audiences, but they, also, were not merely kid lit. The new, enriched series is for every age on the planet. Test me! ~ Jodi

Jodi Lea Stewart’s award-winning adventure-mystery trilogy, Silki, the Girl of Many Scarves, is set smack dab in the middle of the Navajo Nation, USA. Her stories feature unforgettable characters, mysteries at every turn, plot twists, humor, plenty of Native American lore & legends, a glossary of Native words, and surprise endings.