The Day the Public Library Stole My Feet

Thanks to John Wayne, most of us remember the Alamo.

I remember *gasp!* before the Internet.

Once upon a distressing day, in a faraway time we called the ‘80s,

I went solo to the downtown public library for a day of hard-core research.

Before Google. Before Yahoo. Before  *diabolical laugh* cell phones!

. . . driving downtown to *please use Piers Morgan’s voice for the next five words* the Grand Poo-Bah Public Library.

Ahem. As I was saying,

1) driving around and around a monstrosity of a downtown public library on one-way streets getting quite desperate for a parking spot AND A POTTY.

2) snortling (which is a cross between a chortle and a snort) and slapping the steering wheel when she finds a just-vacated parking spot in front of the library and won’t have to park eight blocks away in the seedy parking lot run by a guy named Lefty.

3) ignoring angry faces of two drivers who arrived at sacred parking spot two seconds later than she did. Hard to ignore ugly hand gesture of one angry driver.

4) attempting to fit her Chevy Suburban “tank” into a parking space the size of a kitchen sink. Result: Failure.

1) stomping away from Lefty’s parking lot muttering about her lousy parallel-parking skills and the eight-block walk to the library.

2) loading up her shoulders, arms, wrists, and back with STUFF as if she’s a Grand Canyon pack mule.

3) walking and huffing and glowing (because women don’t sweat) all the way to the library on numbed-out, but very cute, high-heeled feet.

As usual, I was hungry to pounce on every fragment of information inside that lofty, pseudo-Roman-Greek-pillared structure of learning and its tens of thousands of yellowed tomes.

I emerged at last from the ladies’ room into a Pantheon of Brilliance. Deeping inhaling the library fumes circling my nose gave me a natural endorphin high. Or was it all the dust mites floating in the air from page-turning currents?

Not sure. Nevertheless, just absorbing that cathedral of knowledge invigorated me.

Achy feet? What achy feet? I was in literature heaven, baby!

I dug my bag of bricks out of the two-inch groove in my shoulder and unloaded it on the blond wood of a nearby library table. Of course, I actually unloaded a bag of ancillary books, notebooks, paper, 3×5 cards, pens and a turquoise nylon lunch sack with a sandwich and a juice box, but it felt like bricks.

Zealously grabbing pens and a stack of notecards, I headed to the catalogued card drawers, giddy with research ecstasy. Two or three steps later, rationale reared its ugly head.

What about MY STUFF?

I looked over my shoulder at my STUFF sitting innocently but tall on the library table. I caught movement from the corners of my eyes. Were furtive characters slithering around the perimeter walls eyeballing my heap of treasure? It certainly seemed so.

I mean, we are talking DOWNTOWN.

What choice did I have? I reloaded my STUFF and took it to the nearest Dewey Decimal lounge.

This was before computerized book cataloging. The few vintage screens in the library had wrap-around lines of people waiting to learn how to operate them.

The lucky few currently in front of the terminals were flanked by two or three library assistants patiently explaining the mechanisms to minds not yet accustomed to absorbing cyber information.

Really similar to explaining nebulae to your great-great granny.

I know. I know. It’s far too much for some of you to imagine this kind of antiquity without envisioning dinosaurs grazing out on the library lawn. Just because I’m a little jealous of you right now, I’m not going to tell you if dinosaurs were out there or not.

Back to my story.

After bloodying my cuticles STANDING and searching through the overstuffed card drawers and pulling out fuzzy-edged cards with Dewey’s special number codes and compiling a list, I reloaded my STUFF and limped – more like a step-drag-step – to the first aisle of books on my list.

That’s when the fun really started because I . . .

1) dropped my STUFF on the floor between my feet.

2) hunkered over it protectively since aforementioned duplicitous characters ventured ever closer to my personal space.

4) wrote furiously on note cards with one eye on my STUFF.

It became a pattern.

Write with both eyes on the disheveled man with trousers rolled up to his knee on one leg. Try not to stare at man’s hairy, pasty leg or listless socks banding his ankles.

He shot me a bet-you-don’t-have-LifeLock stare.

It was a bet-I can-run-faster-than-you glare. I scowled at him with and hovered closer to my STUFF, especially my purse.

This went on for about three hours.

Factoids painfully gathered, I stumbled out the magnificent double doors of the downtown public library, down the steps and back to my Suburban dragging my derrière and, of course, my STUFF.

After the eight-block walk, I threw all that STUFF into the back seat. Sitting under the wheel, my key in the ignition, I rummaged through my purse for the precious index cards full of research gold.

I dug and dug. I jumped out and flung open the passenger door. I tore through my tote bag, books, notebooks and turquoise lunch sack.

Miserable as a hound dog in a corset, I had to face the facts. I’d left my cards on a bookshelf back at the library. Had to put them down, you see, to reload all my STUFF.

I stood there grasping the side of the Suburban, teetering on my four-inch heels and arguing with myself. Should I trek the eight blocks back to the library on the off chance that my cards were still sitting there undisturbed, and not being crinkled *softened* that very moment to use as roll-yer-own cigarette paper?

I drove home blathering something like wub wub-wubbie woo. In retrospect, I believe that meant the public library had stolen a lot from me that day – my back muscles, my research cards and ,

most especially, my feet.

My feet weren’t feet any more, but numbed out blocks of wood suffering from a blister epidemic.

Lesson learned – when I go to the library these days, *which, incredulously, I still love to do* I take a human STUFF watcher along.

AND I NEVER, NO NEVER, wear high heels to the big downtown public library!

What about you? Do you remember the prehistoric days before the Internet? Did you ever get into a mess like this one with no one to help you out of it? If you’re a writer or researcher, what percentage of your research do you do inside an actual library?

Done with Dewey by Tali Balas Kaplan at the ACLS  Blog (Assoc. for Library Service to Children). 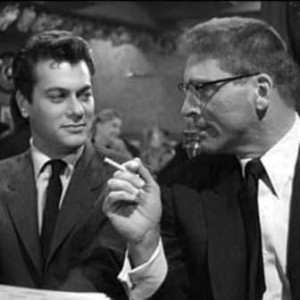 Stop with the unauthorized media, Tony, and one day, you’ll be a big shot like me.