*NOTE: In the olden days—the 1990s—thongs were shoes one wore on his or her feet. I take no responsibility for thongs later sneaking into the world of undergarments – JLS 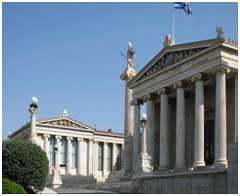 It was a glorious day at the Academy.

Athens had few rivals for beauty and titillation of the senses in early spring when salty sea vapors courted pomegranate blossoms.

Young Aristotle sat on the steps leading into the Academy, his head leaning against the marble base holding a sculpture of the beloved goddess Athena.

The thought of the horse and chariot races in two days made Ari smile as he slipped dreamily somewhere between the region of Heaven and earth. Musing in the warm sunlight, Ari knew life as a pupil of Plato in the center of the grove ofAcademus was good indeed.

A SWOOSH roused Ari from his musing. So intense was the SWOOSH that Ari’s hem blew up and struck him in the nose.

“By the gods! What strange wind was that?” Ari asked no one in particular as he turned to look around him.

Noticing several men peering through the columns into the interior of the Academy, Ari squinted, trying to see. There it was. A kind of blur of white and…it was very hard to say what.

Here it came toward them all! WHOOSH!

Like a mighty rushing wind, it was as it raced through the columns, past the robed men and down the steps to a waiting chariot and horses.

Dumbfounded, the students began to cluster, their inquisitions and speculations rising to a low roar. Ari leaped to his feet.

The “unknown” had momentarily disappeared into the interior of the chariot and now was coming back up the steps. Many fell, covering their heads. Some ran behind Athena and peered from between her marble legs. Still others began to loudly elicit help from the gods.

Ari held his position. The magical wind came toward the crowd with shocking speed and stopped in front of Aristotle.

By now, many sages had appeared from the Academy’s depths, having been summoned by panic-stricken voices to come hither with all speed. Shock and disbelief played on their ceased, intelligent features as Plato solidified from the “unknown” blur.

“What bedevilment is this? Are you indeed our Plato, still of earthly blood and bones? Or are you a creature of the sorcerer’s brew? Speak now, or we shall be called to action!” demanded an elder.

“It is I!” shouted an exuberant Plato.

“Gather round, my friends, and hear real truth as you have never heard it before!” Plato beckoned with wild arm gesticulations.

“It is indeed difficult to explain, my fellow pursuers. Most lengthy, as well. So I shall not bother. Time is, as they say, of the essence! Suffice it to say that by a ploy of the gods’ designs, I was magically carried away in a whirling storm to another time…all the way to what is known as the future twentieth century!”

Gasps, cries and moans erupted from the crowd as they mourned the loss of the great Plato’s mind. Naturally, he was mad…and what manner of thongs were about his feet? Ghastly, ugly, torturous things surely made in the corridors of Hades!

Plato saw their stares and followed their eyes to his feet. He smiled and explained, “In the twentieth century, these are known as Nikes! They greatly improve one’s speed. Speed is everything, my fellow Athenians.

“Come, come now. Not a moment to spare. I have brought back wonderful methods from the great and learned teachers of the future. Today, we must cover all the notes I have made on the Parmenides. I will give you what is called a “test” in one week on that subject, and on all the dialectic substance we have talked about this year. We are so behind! I have prepared a syllabus to give to all of you. Never mind what it is. No time. We are getting further behind as we stand here!

“No more days spent in pursuit of laws and theories, endless questions and answers. From now on, I lecture and you listen. If we stop for debate, we will not be on schedule! Ari, that subject of Topics – too lengthy, my son. Let us put it aside for other issues!

A test covering the geography of the world will be given tomorrow. You will spend two weeks listening to me lecture on the man of reason, man of spirit and man of appetite. Then we will have a major exam. Your parchments will be due two weeks after that on Republican values of the city-states.

“Come men, follow me. Make haste!” Plato bellowed as he jauntily threw the folds of his toga over his arm. Looking down at the twentieth-century Nikes, Plato SWOOSHED into the Academy followed by a group of drooling, half-insane, stressed-out, nail-biting, pre-ulceric seekers of higher knowledge.

“Just do it!” rang from Plato’s lips as he quickly passed out the term syllabus and took his position behind the lectern.