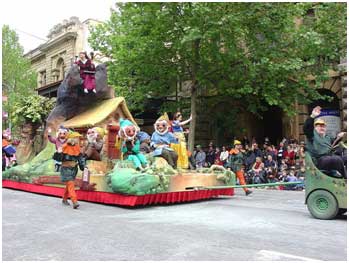 Emerging from a face-to-face session with an editor recently, I felt like I stepped out of the door and onto a flower-strewn parade float dressed in a pageant gown, a tiara and a ribbon sash diagonally proclaiming I wasMiss Metaphor, and not in a good way.

I realize metaphor, and its cousins—simile, hyperbole, allegory—add punch to pallid writing. They brighten, enlighten and freshen.

Knowing when and how to use metaphors is an art, as well.

Some writers are addicted to figurative language such as metaphors. Consider the following example:

The female fire hazard blazed her way into the board meeting—bull nostrils flaring, poblano pepper eyes glowing—and roared at the Sovereign Power himself, “Give me back my job or I’ll torch your underwear from the inside out!”

Perhaps there should be a Metaphors Anonymous with a 12-step program for weaning yourself off metaphors?

If you salivate when mulling over the precepts in Elements of Style by Strunk and White and wholeheartedly believe you are a shoo-in for the next Newberry Medal, then press on in your usual conservative way.

Stick to the standard rather than the offbeat in your writing.

Do not affect a breezy manner.

If, however, you are frequently told your work lacks color, imagination, excitement or interest, run—don’t walk—to buy Arthur Plotnik’s, Spunk & Bite. Read it under the covers with a flashlight if you must, but read it immediately.

Plotnik, a self-defined writing-rule-rebel, said, “Both Strunk and White knew well that bending the rules…can give writing its distinction, its edge, its very style. Bending the rules can spring writers from ruts—get them out of themselves, out of the ordinary, and into prose that comes alive, gets noticed, gets published.”

Bottom line—just as a good pageant contestant should be beautiful, well rounded and interesting, so should our writing.

A sassy blend of metaphor, mixed with essential writing rules, might let me stand proud on that Miss Metaphor float, smiling and waving.