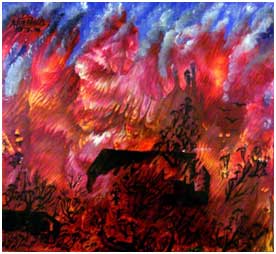 Your home is in flames as your watch, or your child is lying injured on a highway following a serious car wreck or you are home alone and hear a prowler attempting to enter your home—what do you do?

Humbly thank God that you have a red, white and blue corp as near as a phone call away. The corp consists of firefighters, emergency medical technicians and police officers who every day put more value on our lives than their own.

Volunteer firefighters make up the overwhelming majority of an occupation called “one of the most hazardous occupations in the world.”

Firefighters, besides working 50-plus hours a week, must be on-call at all hours and risk injury or loss of life from sudden cave-ins or smoke. They come in contact with poisonous, flammable and explosive gases and chemicals.

And what are these courageous men and women paid? Those who are paid get an average salary of about $25,000. Most firemen I know hold two to three jobs to support the families they never see.

How many of you can fathom that the emergency medical technician (EMT) fighting with all his gutz to save a fellow human being, like the ones we see on 911, is making an average salary of $27,320 (if he/she is a paramedic)?

Again, surprisingly, except in large metropolitan areas, most EMT services are provided by volunteers.

Every morning when “Amy” kisses daddy good-bye, it is more than possible that she won’t see daddy for dinner. When “Billy” plays catch with daddy, every time could be the last time.

Daddy is a police officer.

Though everyone faces possible injury or death each day, the injury rate for police officers is higher than for any other occupation.

The inherent danger of police work is almost incomprehensible, from pursuing speeding motorists and apprehending criminals to dealing with public disorder. Police officers are expected to help maintain public law and order anytime and anywhere. They are never really off duty.

Through the safety of our cities, towns and highways depend on these courageous men and women, the average salary (after six years or more of service) is only $28,700.

People in the US spend more per year for soft drinks than is allocated by our government for police protection.

In contrast, some celebrities receive $100,000 and up (way up!) for a voice-over endorsement on the radio, or for TV ads that run from seconds to scant minutes.

Is something backward or what?

I don’t know about you, but I honor and appreciate these heroes.

I back the red, white and blue of America.