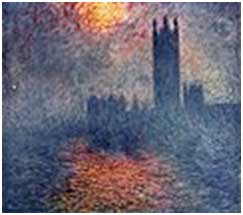 The place was London—spooky, thrilling, pompous, historic, charming, expensive, wonderful London with its razzle-dazzle intertwine of ancient and pop-cultural life.

Sooty, damp, sweaty, tired and delirious with wanderlust, we arrived back at the London train station to return to Rochester. Wrestling through thick crowds on the train, we couldn’t believe our luck as we spotted two empty seats amidst a total of six inside a nice enclosure.

We chatted happily and nestled noisily in our seats, rattling our numerous shopping bags and goodies.

A tomb-like silence soon settled on our senses. For the first time, we noticed we were sitting amid what had to be English-version models from Gentlemen’s Quarterly: expensive three-piece suits, perfectly unscuffed shoes, buffed nails and meticulously groomed hair.

Each had his daily newspaper opened in front of his face and appeared deeply engrossed in it. No other sign of life was manifest in the “GQ gentlemen.”

“Good grief!” Mark and I conveyed to one another with saucer eyes—we’re in a PRIVATE gentlemen’s car, and these guys were too polite to tell us!

Our jeans and “street-trollop” appearance suddenly became unbearable. I glanced at my husband, and he rolled his eyes in an animated arc and puffed out his cheeks as if to say, “Whew, what a bunch of stuffed shirts!”

He knew better than to commit this act of treason. All my life—which he knows—I have battled a private affliction of the most humiliating kind; that is, in terribly absurd situations, I become struck with uncontrollable hilarity that cannot be checked.

My PROBLEM took over. Outrageous fits of laughter possessed me as I snorted, blew, wheezed and made strange, vulgar sounds in my throat and chest. I couldn’t stop; I was out of control. Meanwhile, all around us,

no eye moved from the newspaper—no face reflected any emotion.

I threw on my sunglasses, but they immediately steamed up with the combination of damp air and my elevated body temperature. As a last resort, I grabbed a book from my shopping bag and pretended to read, silently begging God to strike me dumb.

I never gained control on that train ride, but I did try to look less dense by keeping my nose buried in my Dickens novel.

Mark and I tumbled from the private booth and off the train as soon as rails and wheels allowed. Taking in gulps of air, I was relieved but mad.

“Why Mark? Why did you do that when you know how I am?”

Mark, enjoying his cool control, shrugged and offered sage advice. “Next time, be sure and turn your book right-side-up. It does look a bit more effective.”

Indeed, I do hope that anonymous group of English businessmen will think of me sometimes with benign humor as they puff their pipes, or get measured for thousand-dollar suits.

Perhaps one out of the four may even be a Shakespeare devotee…and attach these words to his sanguinary memory of me: