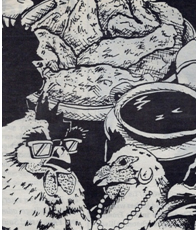 Chicken is one of those words that, depending on one’s perspective, immediately conjures a mental image. Three of these images seem to stand out most.

Can an island of homemade southern fried chicken surrounded by biscuits, mashed potatoes, cream gravy, and corn-on-the-cob be beat (at least south of the Mason-Dixon Line)?

Most of us have cut our teeth on dishes like chicken pot pie, chicken ala king, chicken cacciatore, chicken tetrazzini, chicken fricassee, chicken au vin, and the “pastor’s comin’ for dinner standby,” chicken and dumplings.

Mmm…I can smell it now.

Contrary to the belief system embraced by some city-slicker types, chickens are not concocted from man-made products and spit out of machines wrapped in plastic on Styrofoam trays.

My grandmother, a sensible farmwoman, taught me how to do two essential things when I was eight: embroider a smart-looking rooster on a tea towel tor my hope chest and de-feather a freshly killed chicken just dipped in 2000-degree water.

My adult life with live chickens has consisted of some very basic bartering: “You supply the eggs, gals, and I’ll show you a rich barn-yard life!”

Keeping chickens at various times over the years has occasionally presented medical opportunities, like when my whole flock got chicken pox.

Now, there’s no use to argue with me. Just call my county agent. He told me how to treat our comb-drooping biddies when they got sick. He’s the one who pointed out that chickens have armpits, and that’s where you give them shots.

The procedure when like this: I chased (after the first one, those pullet IQs rose several levels) the targeted ill chicken under the roost and over the roost and through the very fertile floor covering of the chicken house, pinning said hapless victim against a wall in a flutter of flapping wings and flying feathers.

Breathless and red-faced from chasing the cholesterol-packing eggster, I would hand the captive to my hubby. Arm locking the feathered creature, hubby would lift one chicken wing to expose the spot.

Mom took over then. And, I think I have this right, let out a karate cry and administered the injection. I tried to do that part, but it felt as if I were sticking straight pins in a voodoo chicken in some bizarre ritual.

Mission completed. The only real task that remained was cleaning, really cleaning, our shoes.

Hmm…I can smell it now.

Society chickens are also known as snobs. But I’ve always thought that people who have their noses so far in the air they could drown in a rainstorm are really just cowards, just “chicken.”

Society chickens are chicken (afraid) to be compared with someone who might be more talented or attractive or intelligent…chicken to get real…chicken to share…and chicken to give.

These unfortunates go through life without a wing or a prayer and can be more foul than any barnyard fowl.

Phew…I can smell them now.