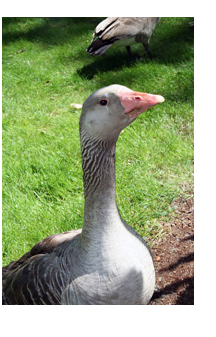 It’s like this – the gander that was flapping my face, back and legs while simultaneously biting blood blisters on my little three-year-old derriere didn’t know he was contributing to my future female assertiveness.

And, being left alone in trees by older cousins while they went to play fast-paced games assuredly built my self-reliance!

By being reared in a farm atmosphere with a pack of heathens for cousins!

Descending upon Grandma and Granddad’s farm every summer made my cousins and me wacky. Throwing our shoes and socks over our shoulders, we screeched with pure, wild summer madness.

I was the youngest, shortest and most sensitive of the cousins (actually, they called me bawl-bag) who swelled in number from six to 16 throughout the summer.

Our fun was simple in those days; we just created our own. Running wild and barefoot, teasing Heir Gander (the “baddest” guy on the farm), and “not mindin’” our elders were all great fun.

Not mindin’, though very exciting, always resulted in a lesson on branch cutting (for switches) and a character-building session involving our gluteous maximi immediately thereafter.

Challenging Gander to a mad race across the barnyard was a thrill! Except for me. My legs wouldn’t get me far before I was missing in action. A little wing whipping before being rescued was worth all the grass-rolling mirth that followed.

One day, though, Gander snapped.

Possessed by Hitler, he went for blood; and I was his victim.

Our screams, as usual, brought a rescue unit of five or six wild-eyed adults.

After “Heir Hitler” was forever reconstructed by an hysterical mom, a grit-building event occurred. My mom, with multiple pairs of cousin eyes staring, pulled down my britches to inspect the Gander bites.

Snickering, then outright peals of laughter, filled the morning air. That’s when I cried…hard. My strength was building!

Other times, when my cousins would tire of fooling with me, I was left on a tall tree limb and told to hold tight and not fall.

Hanging on for dear life—I’m afraid of heights to this day—I bawled and squalled until they came back. When they did, I was the center of attention. Merrily swung onto a pair of shoulders, I was teased, joked and promised games and stories. They even meant it.

I was all giggles when we returned to the farmhouse. Any notice of my red eyes or purple face was attributed to the heat and Jodi’s allergic problems.

Experiences like these were difficult; but I’m glad I went through them and others later on. Why? Well, I have a theory:

A little grit in your craw can make life’s toughest tidbits easier to swallow.
—The Collegian, Fort Worth, Texas, April 6, 1994—