I had a pretty good start in life as a TEXAN…

My oldest brother LEE felt hugely responsible for pulling me a bajillion miles in his Firestone Pilot wagon. It just wore him out, but he did it anyway. When he didn’t, he felt guilty, which helped nurture his lifelong worry bug.

GENE, my other older brother, was a happy-go-lucky kid who did things like hide out in the sunflower field close to our little rented wood

house to worry Mom to death. Even though he got a paddling for it, he thought it was hilarious…at two years old! He was just like that—anything for a joke. As a second grader, after we’d moved to St. Louis, MISSOURI, he cut a woman’s flowers out of her flower bed, marched up to the front door and sold them to her before she knew they were her own flowers.

When I was a year old, my parents divorced. Mom moved us to MISSOURI where most of her family was living at the time. She became a single mom living in St. Louis with three kids and three waitress jobs to support us. She carried a sharp weapon in her hand when she got off the city bus in the middle of the night and walked home alone. She was tough. A survivor. I have no doubt she could have defended herself quite adequately if the need had arisen. Interestingly, while I was in college, Mom became a crack shot with a sawed-off 12-guage Browning automatic shotgun, so maybe she had a little gangsta attitude running through her veins from the start.

Most summers were spent with my Aunt Dobbie in Belle, MISSOURI. How that little widow woman fed us, as well as her own four kids still at home, I can’t fathom, but she did. Summer was time for all the cousins to show up at my grandma and granddad’s place. I cherish those summer memories full of crazy, barefoot abandon.

Granddad was a sharecropper who, in various areas in OKLAHOMA and MISSOURI, raised pigs and the best corn ever to stick it’s head out of a dirt clod. We weren’t exactly like the folks in Grapes of Wrath. That was before my time. However, we might have been the Raisins of Mirth—get it…aged grapes are raisins 🙂 —because we were as poor as dirt but didn’t have the good sense to get down in the mouth about it. In fact, we were the laughing-est family I’ve ever known. Still are. All get-togethers are slap-your-leg silly affairs.

Mirth ran like a bubbling brook through my mother’s family, in her ten brothers and sisters, in most of their spouses, in her parents, and definitely in all the cousins. Everyone was always up for a good story, joke, or prank. We kids thrived on that good humor (and plenty of biscuits and gravy), even though we got in lots of trouble for doing dumb stuff that could have gotten us killed or maimed. Me—not so much, because I was the youngest of that passel of cousins.

My age and shorter legs brought its own kind of trouble, which I’ve written about, maybe as therapy, ever since. Trouble such as NOT outrunning my grandma’s evil gander, or being stuck in a tree by my cousins while they ran and explored. I would bawl my eyes out and hang onto that tree for dear life. They always came back for me, thank goodness, but I think that’s the reason I have a fear of heights to this day…you reckon?

We never heard of wearing protective gear in those days. I wonder why our noggins didn’t crack wide open when we took turns climbing into a giant tractor tire to be pushed by multitudes of small hands down a steep hill at dizzying speed. The ride was over when you crashed into a tree, rock, or other object. None of us ever got a concussion, so maybe skulls were thicker in those days.

Life changed forever when Mom told us she was taking a job as housekeeper and cook on an ARIZONA ranch. Arizona? Was that anywhere near Mars? To say it was a shock to move away from all that cow-plop jumping, chicken chasing, church attending, green persimmon eating, tire crashing 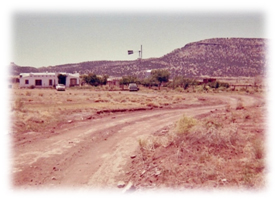 and rope swinging over a sulpher-smelling creek along with acres of cousins is an understatement. We three kids couldn’t get our minds around it, but that made not a whit of difference. Mom had her mind made up, and that was that.

Throwing up in the back of the car is my most vivid memory of that long trip.

We didn’t have a car, so Mom’s youngest sister and her husband drove us all the way to Arizona. They were tickled pink about my stinking up the back of their car in the heat with my car sickness. No air conditioning…you get the picture. 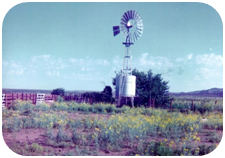 The rancher—and Mom’s new employer—John Leverton, met us in Holbrook, Arizona. We went crazy over the teepees at the Wigwam Motel and begged to stay the night in one. No deal, but at dinner, Gene asked the waitress if we were eating Indian (Native American) chicken. Everyone got a laugh out of that, but Gene and I didn’t understand why. Then it was time to head for the Mesa Redondo Ranch. Yes, I know. The “Redondo” should be “Redonda,” but it was named back in the 1920s, so why argue? Besides, it’s more fun to say Ree-dawn-DOE. It sort of echoes off the rocks, or jumps into the wind as it whips through a canyon. The small mountain behind the ranch house was named the Mesa Redondo Mountain.

So, we became Arizonians. Plain and Simple. Mom fell in love with John, who was much older than she was, and I fell in love with everything Southwest and ranchie and horsie and cow-ie (that’s how young Jodi perceived it). I rode horses, picnicked in sandy washes full of natural sparkles, hunted for ancient shards of pottery baking in the sun, and climbed our White Rocks like a lizard. My big thing was scurrying to the top before anyone else. Finding tiny treasures on the sides of the huge red anthills fascinated me…things like tiny arrowheads fashioned to hunt birds, semi-circles of beads carved from bone, and flecks of flint and obsidian. I became so eagle-eyed, I could spot a small arrowhead lying in the dirt from the back of a pickup while bouncing two feet in the air. Sometimes, Mom and I packed bologna sandwiches with green onions, red-bib lettuce, and tomatoes out of our garden—plus potato chips—and rode our horses to look for treasures and have lunch under a cedar tree somewhere on the 50,000+ acre ranch. We drank from old military canteens filled with our own well water. 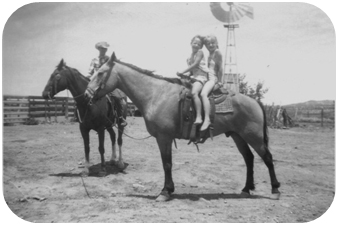 With no television or radio reception, I entertained myself in unusual ways, like seeing how long I could balance a broom in the air with the handle in my palm, or making running jumps onto the back of our butane tank and hanging off the side like a rodeo trick rider. Or singing to chickens. Once, when I became the proud owner of a gigantic cardboard box our new refrigerator came packaged in, I cut widows into the sides, made curtains, and decorated the outside with crayons. That was some box! 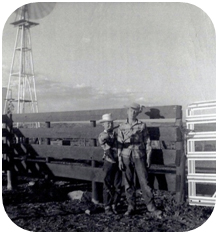 My imagination grew by leaps and bounds. I read constantly and was usually alone. Sometimes I was a beautiful Indian maiden. Or a misplaced castle princess from the olden days, which made the chickens my ladies-in-waiting turned into clucking hens. I actually expected to top a knoll or go around a grove of junipers and stumble upon an ancient village of Native Americans who had left their pieces of pottery and arrowheads behind for us to see. I hoped and hoped for that! Never happened, but I did have plenty of Hispanics and Natives for classmates. That pretty much made up for it.

Our elementary school was in Concho. Getting there meant driving up and down steep hills and nine miles of rocky red road so bumpy my rear didn’t stay on the seat the first two years of riding to school in John’s old white and turquoise GMC pickup. The smooth six miles of state highway after that rutted nightmare was like being granted amnesty. Smoke from John’s lit cigar inside the closed truck cab made my eyes red and my nose drippy. We packed four to six bodies inside that small enclosure. We’d roll up to the school, windows clouded over with smoke, and I couldn’t get the door open soon enough. Leaning sideways off someone’s lap, I’d usually tumble to the ground with billows of smoke encircling me. Later, John felt bad about that and quit smoking altogether, including cigarettes. He was seldom without a big Roi Tan cigar in his mouth, but he never fired it up again. He was a good man.

Education at Concho Elementary was as much about being a kid as it was about book knowledge. Great softball game at lunch? We stayed outside in the fresh high-country air and played it out, teachers running the bases right along with us. I loved that, and the huge open playground built on dirt and surrounded by cyclone fences and tamarisk bushes. First through fourth grades were in one classroom, and fifth through eighth grades were in the other. It was hard to ignore the higher level grades because they were taught in the same room, so I didn’t—and wound up skipping ahead almost two whole grades. That caused me to be barely sixteen years old when I became a senior in high school. I don’t recommend it. My brain was there, but nothing else was—that’s another story, however.

Not all tales end as you expect, and Mom and John’s didn’t. They split the sheets when I was a teenager. Our lives changed again. When Mom remarried, it was to Red Myrick: rancher; gentleman cowboy; winner of the 1965 International Arabian Cutting Horse Association (IACHA) championship with his beautiful horse, Jameel Rizpah; amazing saddle maker; inventor; western shirt designer; and a whole slew of other incredible things. His ranch in Winslow, Arizona, actually butted up to the Navajo Nation; whereas John’s ranch wedged in between the Navajo and Apache Rezes, but not touching any borders. 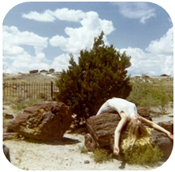 Okay. Big changes. I had to pause and think things over. I missed John Leverton, and still do, but I couldn’t be responsible for a marriage failure. Besides, I was having my own teenage angst and bewilderment about then. I’ve always been one to embrace the inevitable, so I accepted Red as my new step-dad. These men are both gone now, but my life is richer and better for having known them. I’m grateful to them, and my world is a little sadder because of their departures.

…to write novels you love to read!