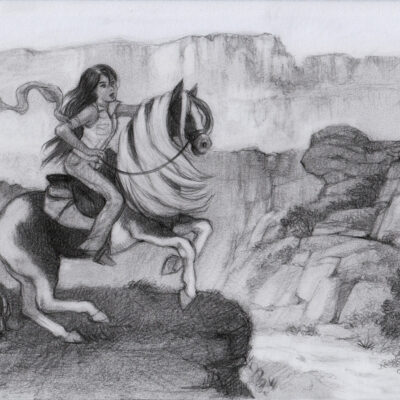 If you’re addicted to scarves, you should know a lot about knots right?

That’s true for the main character of the adventure-mystery trilogy, SILKI, THE GIRL OF MANY SCARVES.

Silki’s favorite danger knot for tying her ever-present scarves end to end is the Double Overhand Stopper knot. In this example, on a very dark night, Silki and her best friend, Birdie, have fallen into an underground cavern on Concho Mountain. Silki is several feet below Birdie, and she is attempting to climb up to her.

“Hold on a minute, Birdie, while I do something.” I worked my scarf ends into Double-Overhead-Stopper knots, the strongest kind Grandfather ever taught me. He said they were strong enough to hold mountain climbers. With no light, I had to do my work by feeling. My grubby fingers felt like claws. How far up was Birdie? I double-dogged hoped I had enough scarves to reach from me to her—BOOK ONE, SUMMER OF THE ANCIENT

To honor a certain scarf, like the one her Marine brother Nick gave her, Silki wears it alone.

Now everyone except Grandmother stood in the doorway making sure the corners of their mouths pointed up, not down. My Hermes scarf was tied in a French-Twist knot around my neck. Being worn alone was the highest honor I could give any scarf—BOOK ONE, SUMMER OF THE ANCIENT

Grandfather nodded and pulled the brim of his Phoenix Suns cap further down on his forehead. The crinkles in his eye wrinkles said he was pleased with my answers. He’d been teaching me knots since I’d learned to tie my shoelaces—BOOK TWO, CANYON OF DOOM

An oath would be broken. Would Aunt Susan and the other keepers of the lion’s secrets understand? My brother Nick said desperate times called for desperate action. I was desperate. Once again, my scarves were the only weapon I had—BOOK TWO, CANYON OF DOOM

When Silki’s cousin Skye from Oregon visits, she decides it’s her duty to teach him about the ways of the Rez, especially about her own world.

I turned around to look at Skye and bit my lip to keep from laughing. I didn’t know him very well, but I guessed he’d feel awkward if I laughed at his questions. I slid off Smiles with my back to the fender . . . —BOOK THREE, VALLEY OF SHADOWS

In BOOK THREE, the girls are in their biggest danger yet. They have no weapons, and if they don’t do something, it might be too late.

I reminded Birdie she had to send the sand bombs up to me all in one scarf using a Barrel Hitch knot. It was a quick knot and worked great for heavy objects. She hated tying knots, but she was okay with it since the Barrel Hitch was a simple tuck maneuver—BOOK THREE, VALLEY OF SHADOWS

SILKI, THE GIRL OF MANY SCARVES novels will keep you turning the pages, guaranteed! Adventure after adventure with bad guys galore, oddities, mysteries, and always a shocking surprise or several at the end! 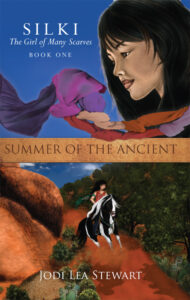 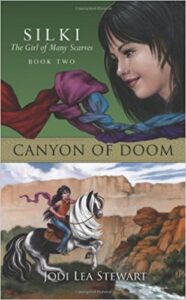 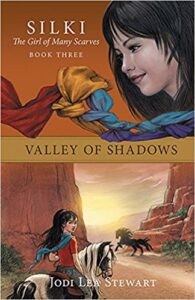