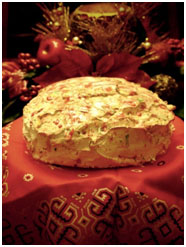 Sift flour, baking powder and salt three times. Work shortening with spoon until fluffy. Add sugar gradually. Continue to work with spoon until mixture is light. Beat egg yolks with a fork until thick. Add to sugar mixture. Add flour gradually, alternating with milk, beating each time until thoroughly mixed. Stir in vanilla. Bake in two greased and floured 8” round pans. Bake at 375° for 25 minutes* or until a matchstick** stuck in the middle of the cake comes out clean.

Cool. Remove from pans. Spread meringue between layers, on the sides and on top of the cake. Sprinkle crushed candy on top and sides. Put in stove and watch it. Take out when candy starts to melt. It won’t take long! Remove from stove and cool. To cut cake, put tip of knife in the center of the cake and tap hand to “break through” light crust of candy on top.

* Grandma Woods baked this cake in unreliable wood-burning cook stoves. She had to watch it closely or it would burn, sometimes on just one side.
** or you can use a toothpick or broom straw (very old-fashioned!).

Beat egg whites until frothy. Add vanilla. Add sugar a tablespoon at a time. Beat until stiff. Spread inside layers and over the sides and top of cake.

Crush with a hammer inside a dishtowel: 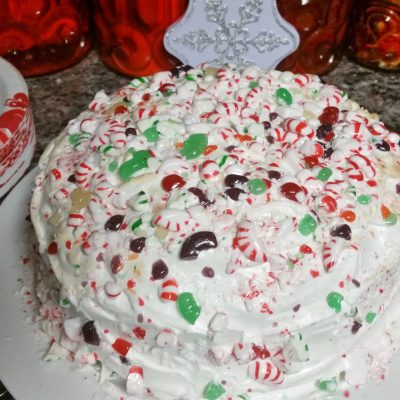 Use any from-scratch or packaged yellow, white or spice cake recipe. Spice cake is extra delicious in this recipe. Bake in two 8” round pans. Cool. Spread New Version Meringue Topping between layers and on outside of cake. Sprinkle crushed candy on top and sides.

Put under broiler and watch constantly until candy begins to melt. If you leave it too long, you could mess up the Meringue Frosting. Remove from oven and cool. To cut, put tip of knife in the center of cake and tap hand to “break through” light crust of candy on top.

This meringue “frosting” is a delicious, marshmallow-type topping. You can pile it high on pies or on this Christmas Cake.  It’s hard not to sneak a few tablespoons for yourself.

Put sugar, egg whites and vanilla in a double boiler. Cook over simmering water, whipping constantly for 3 or 4 minutes or until mixture reaches 140° on a candy thermometer. Remove from heat and pour into a large bowl. Beat at high speed for 10 minutes or until thick and spreadable. This meringue tastes a lot like creamy marshmallows. The thin crust of melted candy on top is an unexpected treat. Delicious!

Read how this cake put face-cracking smiles on the faces of a bunch of kids in the Christmas of 1933! Christmas in a Sock

Jodi Lea Stewart is the author of a contemporary trilogy set in the Navajo Nation, as well as two historical adventure-mysteries. More are on the way!

Trouble sneaks in one Oklahoma afternoon in 1934 like an oily twister. A beloved neighbor is murdered, and a single piece of evidence sends the sheriff to arrest a Black man that Biddy, a sharecropper’s daughter, knows is innocent. Hauntingly terrifying sounds seeping from the woods lead Biddy into even deeper mysteries and despair and finally into the shocking truths of that fateful summer.