Starting with: The saga of STUBBY.

No slouch, Stubby was promoted to the rank of Sergeant and respected his superiors with a famous one-paw-over-the-eye salute.

Private Robert Convoy found the stray Bull Terrier Mix in 1917 at the training camp of the 102nd Infantry at Yale University. He and his buddies kept Stubby with them throughout their training. When their ship deployed to France, Stubby was smuggled aboard. He went through additional training before participating in seventeen war engagements in four WWI offensives. Once, he roused a sleeping sergeant to warn him of a gas attack, giving the soldiers time to don masks. Many lives were saved that night.

The fiesty little stray didn’t disappoint. He performed numerous other heroic deeds and  served as an icon of hope. Later, he was awarded the NCO rank of Sergeant. The most decorated dog from WWI became a post-war celebrity who hobnobbed with Presidents, Generals and Hollywood actors.

Dogs and the Military

Dogs aren’t new to the military. From ancient war camps to now, canines have played an important part. Since the Revolutionary War, dogs served the U.S. military as  companions, helpers, morale boosters and mascots.

In WWII, more than 10,000 MWDs were deployed to both Europe and the Pacific to act as sentries, scouts, and mine detectors.

The Vietnam War elevated MWD duties to serving with their handlers and units as co-fighters and expert danger sensors, as well as mine detectors.

Unfortunately, a great travesty of justice occurred after WWII and the Vietnam War. The military classified the MWDs as “disposable.” When our troops went home, the dogs were euthanized, or left behind to fend for themselves.

No way to treat a war hero.

NEMO was One of the Few Vietnam War Dogs to Make it Back to the U.S.

Nemo and his handler, Airman Second Class Robert Thorneburg, were patrolling an old Vietnamese graveyard when they were attacked. Nemo and Thorneburg  killed two Vietcong before Thorneburg was shot twice in the shoulder. A bullet entered under Nemo’s right eye and exited through his mouth. The injury didn’t stop Nemo. He threw himself on four Vietcong guerrillas as they opened fire. Despite his injuries and being blinded in one eye, Nemo crawled back to his handler and draped himself over him, guarding him, until medical help came. The residing vet had to be called in to coax Nemo off Thorneburg. Both survived.

Back at the base, Nemo had a tracheotomy and skin grafts. He lost his right eye. He returned to the U.S. as a war hero, making personal appearances and spending his retirement at the dog training facility at Lackland AFB.

Changing hearts is a big job. It takes time. I believe Nemo was instrumental in starting to change the heart of the military about MWD classification.

Here’s what one Animal Care Sergeant of the U.S. Army said: “I just wanted you to hear this from someone who’s right in the thick of everything with these MWDs about just how much these dogs are loved while they’re working. They really do get royal treatment that most people don’t have the opportunity to see . . . they really aren’t treated like property . . . ”

Today, MWDs are considered valuable assets in supporting the war on terror. They safeguard military bases and sniff out explosives. Approximately 2,000+ working dogs are trained and cared for at Lackland Air Force Base in San Antonio, Texas – the center for the Defense Department’s Military Working Dog Program. The trained dog and handler teams are deployed worldwide.

The military, as well as private organizations, have also stepped up to the plate sponsoring adoption of brave dogs who served our country in the Armed Forces.

Ninety acres of mine-contaminated land were declared safe for building a College of Agriculture in Iraq because of five selfless canines. It took the MWDs eight years to complete this task. Now, thanks to the help of many caring organizations, BLEK, MALYSH, MISO, NERO and ROCKY were put up for adoption by American families.

RAGS – a Cairn Terrier (France, WWI) ran a message through falling bombs though he was gassed and partially blinded (he survived!).

CHIPS – a German shepherd/husky/collie mix (France, Germany, Italy and North Africa; WWII) was the most decorated K9 who served in WWII.

KAISER  – a German shepherd who completed more than 30 combat patrols and became the first dog killed in action during the Vietnam War.

Lex – a hero for our times

During a rocket attack in Iraq in 2007, handler Corporal Dustin Lee was fatally injured. His MWD, Lex, sustained multiple shrapnel wounds but steadfastly remained with his team partner until other Marines arrived to provide medical attention.

The broken-hearted Lee family wanted to adopt their deceased son’s dog. While Lex was in intensive treatment for his wounds, they began appealing to the Marine Corps for the adoption. After months of prayers, letters and phone calls, the Lees won their battle to adopt Lex, who had returned to active duty.

For five years, Lex worked as a certified therapy dog with Paws 4 Hearts, visited wounded veterans in hospitals, went to veteran dedications and helped to bring awareness to the U.S. War Dogs Memorial. He, along with the Lees, worked tirelessly to change how people look at MWDs.

After an heroic life superbly lived, including winning an honorary Purple Heart, twelve-year-old Lex passed away March 25, 2012. Rachel Lee says the battle is not over yet. She continues her fight for federal support for families who adopt animals that served in the military.

A quote from their official page: “There is no way we can put a number on all those American Servicemen’s children, grandchildren, and great-grandchildren that are here today because America gave her sons and daughters a dog to serve with during times of war. And the dogs had names like CHIPS (WWI) , YORK  (Korean War), NEMO (Vietnam War), COOPER (Iraq War), HUNTER (Afghanistan War) and the list of names goes into the tens of thousands . . . ”

What about you? Would you and your family be a good fit for a retired Military Working Dog, a national hero on four legs? 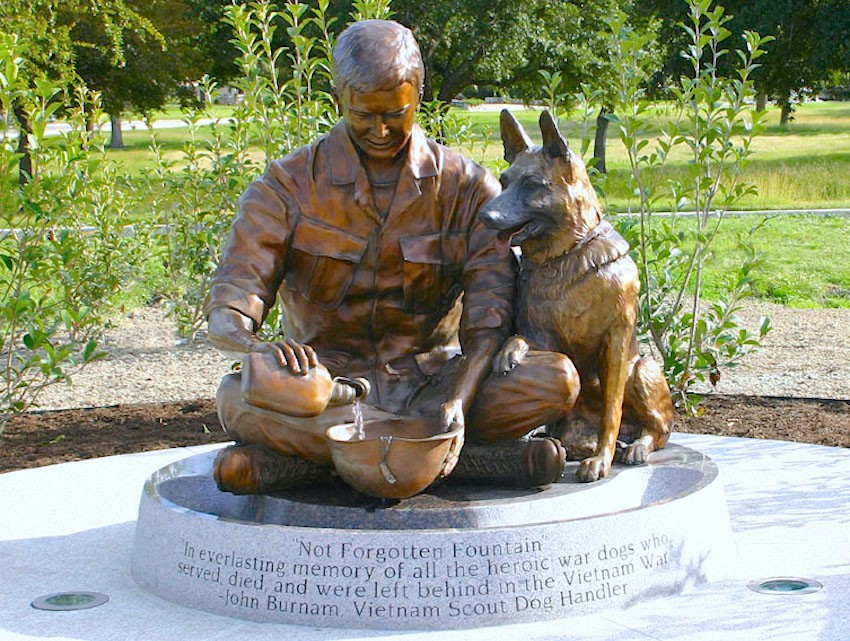 The “Not Forgotten Fountain” is part of the U.S. Military Working Dog Teams National Monument, in San Antonio. By: Paula Slater

It’s not a light decision.

Cracker! The Best Dog in Vietnam, a novel by Cynthia Kadohata, is one-dog’s first-hand account (yes, it’s told from Cracker’s perspective) of serving in the military in Vietnam. I listened to the audio book on a road trip, and it was riveting. Take it on your next trip. You and everyone in the car will be mesmerized! Here’s a link to more books and videos about military war dogs: http://olive-drab.com/od_wardogs.php

One more thing: A Dedication to Joshua

This blog about Military Working Dogs is lovingly dedicated to Joshua Ben Stewart Selah, my beloved companion for fourteen years, who went to heaven on March 28, 2012. May he rest in peace until we are together again. I love you, my sweet boy – Jodi Lea Stewart