The Lost and Angry Pound

Draped over a rock still warm from the day’s scorcher,the lizard gazed thoughtfully at the ghost town silver-lined by a full Arizona moon. A saloon glowed softly among the deserted buildings. Tinkling piano music, mixed with the occasional clamor of loud voices and guffaws, drifted into the night sky.

The desert iguana slithered off his vantage point and moved soundlessly through thirsty weeds and baked red rocks.

Cautiously, he darted beneath the rotting boards of the old boardwalk running the length of Main Street. He paused to chart the slope of the saloon wall and catch his breath. His eyes rolled in a full circle to check for danger before he scampered up the rough-hewn timber. Upside-down and hidden by the shadow of the overhang, the desert sentinel gazed through the dull glass window into the amber haze of kerosene lamp light.

Something definitely had the customers riled up inside.

Buttery yellow and dirty-white shapes clustered against the inside walls. More shapes waddled side to side around the room. The choking odor of rancid grease hung in the air.

Yessir, the lizard allowed, Blubber Gulch Saloon was like no other this side of the Rio Grande. It was known in the West as a place where outlaw fatty globules and lost, lonely pounds could hang out with no diets breathing down their double necks.

“Bartender! Give me another!” shouted a clotted, ill-shaped Pound at the bar. He lifted a shaky mug toward the serene Pound behind the bar.

“You betcha, Blob,” said the bartender, quickly filling Blob’s mug full of syrupy lubricate. Blob downed the liquid in one gulp, burped an oily belch, then spat on the floor.

“Yeah, I dropped off ol’ Jodi and laid on her floor shaking like curdled cream. That is, until I got mah wits back together.”

Blob’s wheeze sounded like a sack full of cats. He turned to the crowd gathering around him and continued. “When I got back to sensibility, I rolled over to a corner and waited. Couldn’t even sit up at first.”

Once again, Blob extended his mug toward the accommodating bartender.

“It ain’t no fair. That Jodi never appreciated me. Nah, not one bit. Fact is, she out and out hated me!”

A collective gasp rose from the onlookers. Blob’s eyes narrowed to slits as he leaned toward them.

“Don’t feel sorry for old Blob, gents. I’ll bide mah time and hang low for a spell. You just mark my words. Before that ornery Jodi can cram her legs into those new…” He looked around with fiery cinder eyes “… SKINNY…jeans, I’ll be right back where I came from, right in the middle of her left thigh!”

Commotion broke out among the Pounds.

“Now listen here, Blob. This is a respectable place. Don’t come in here using bad language! You cuss that ‘skinny’ word again, and I’m gonna have to throw you out,” the bartender warned.

Blog growled and dipped his fingers in a jar of grease sitting on the bar. After noisily sucking them clean, he pointed at the ceiling.

“I’ll be back, Miz Hotsy-Totsy Jodi Lea Stewart, and I’m bringing a bunch of mah renegade friends with me. You ain’t seen the last of me and my kind!”

With that, Blob fell backward in a greasy stupor. His cohorts strained as they pulled him toward the wall, leaving a broad streak of fat on the floor.

No one noticed the lizard shaking his head over the smudgy glass window. Slowly he made his descent and disappeared into the darkness. He walked until the light peeked over the horizon, his tail leaving curvy “S” marks in the silent sand.

Did you ever think about where all those pounds go when we drop them? Maybe a little ghost town in the Arizona desert? If you’re like me, my pounds don’t have to wait very long before “coming home.” 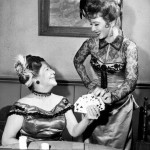 Myrtle, if I catch you cheating with unauthorized media again, I’ll have to tell the marshall.