The truth is, cacti can be the best of times and the worst of times. It can represent the age of wisdom or the age of foolishness. *forgive me Charles Dickens*

The Best of Times/Age of Wisdom

Nopales, a fancy name for young cactus pads of the prickly pear cactus (Opuntia) is a food marvel. Use them in scrambled eggs and jalapenos. Grill them and use in tacos, enchiladas or quesadillas. Use them in salads, or as a side dish. How do they taste? Sort of green-beanish with a hint of lemon.

Almost any fleshy cactus fruit is edible, but the prickly pear fruit wins the popularity contest, hands down. Also known as cactus fruit, cactus figs, Indian figs, Barbary figs, and tunas, this little fruit is dynamic! It grows two to four inches and is shaped similar to an avocado.

The immature fruit is green and matures to orange, red, pink or magenta. It can be eaten raw, or made into jelly, syrup, candy or even margaritas!

Nopales are being added to smoothies. Why?

Because the humble little Opuntia cactus pad is receiving high marks for its low glycemic rating and ability to control blood sugar naturally. What’s more, research suggests the imbiber’s blood sugar continues to drop for two hours after ingesting it.

Who hasn’t seen any of the old vintage Westerns depicting a poor soul with sun-blistered skin and shredded clothing crawling, scratching, grunting to get to a lone cactus in the torrid desert? He has only the strength to reach the cactus and carve a hole in the side or top. He reaches in with both of his filthy, shaking hands and brings the lifesaving liquid to his peeling lips.

Ahhhhhh. Man is saved. Cactus is the hero.

But hold on! Although the large saguaro with its arm-like branches can store as much as 200 gallons of water, the liquid can be toxic to humans.

What is a dying desert crawler to do?

Aim for the prickly pear and barrel cacti, and don’t expect a lot. Forget clear bottled water. The inside walls of the cactus will be tough. The drinkable fluid inside its moist, spongy pulp will most likely be bitter.

The best way to get nutrition or water from a cactus *in an emergency* is to peel and eat the prickly pear or barrel cactus fruits. Or eat the raw pads of the a prickly pear. Be careful of those spines!! Ouch!

Native prickly pear growth has been used for over a century to feed cattle. The pads of the Opuntia are low in dry matter and crude protein, but will suffice in emergency conditions.  The pads also contain a sufficient amount of moisture. Recently, the Southwest cattle industry has begun to cultivate prickly pear cacti as a fresh source of feed and water for cows. The spines can be burned off to reduce mouth injury.

Since cattle tend to avoid the sharp spines, prickly pear cacti can actually be used like a fence to keep cattle in a certain boundary. 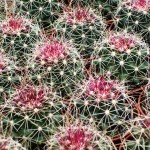 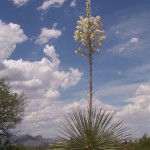 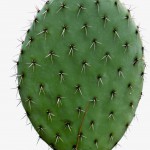 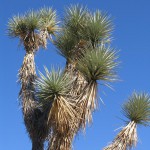 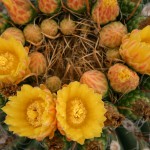 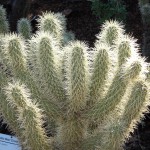 The Worst of Times/Age of Foolishness

Anyone who has ever stepped on a cactus, fallen into a cactus, or gotten the spikes of a cactus in any fleshly region of his/her body, knows that cacti can be “the worst of times!”

After a long afternoon of walking in and out of washes, climbing rocks and scouring the red dirt of our Arizona ranch looking for Indian pottery shards, my brother and I wound up back at the pickup truck thirsty and tired. The grownups had all the canteens with them, so we were out of luck. My brother got a bright idea – why not eat some of the prickly pear fruit decorating the cacti all around us?

He sliced off a couple and tossed one in my direction. I carefully picked it up, but stupidly tried to take a bite out of it. Tears immediately began streaming down my cheeks as I realized my mouth and tongue were full of hairy little spikes from the skin of the fruit.

I’ll never forget how I felt trapped with a mouth full of stickers (glochids). My brother scrounged a pair of pliers out of the glove box and went to work. Soon, I was free again, and for that one day . . . he was my superhero.

Do you love or hate cacti? Have you ever had a cactus houseplant? Did you ever step in the middle of those spikes? Fallen into them? Eaten any of the fruit or pads? What’s your favorite cactus recipe?